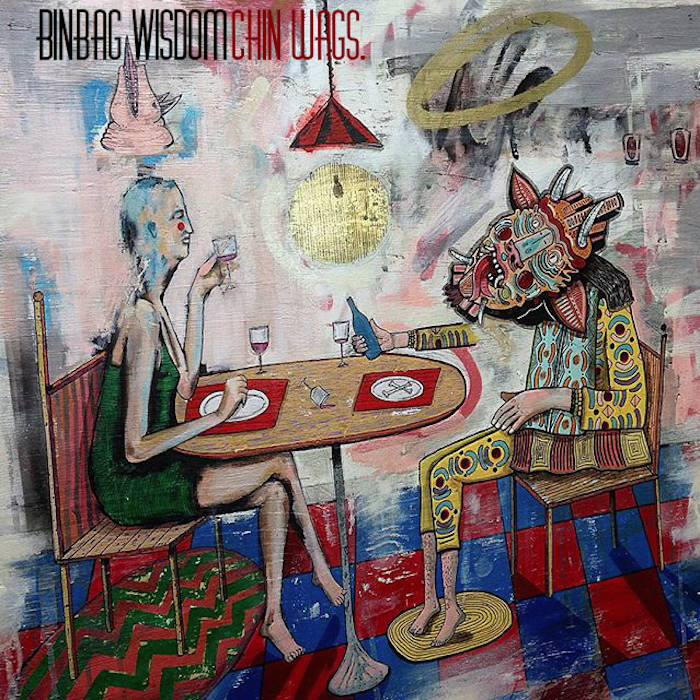 Binbags, sick chat since I been back
only wish i was a little slicker with these chin wags.
In that vein, you have to live that pain.
Split that brain of yours and give back mate.
I’ll grab the microphone and chat about my life at home:
I’m hanging out with dickheads and I’m probably going to die alone.
I’m never violent though, thats something i suppose,
I propose we go and spend the night in an asylum bro.
It might be dope, It might be longer than my head is.
Accept it, We’ve settled in a cess pit.
Depressed shit. Pissed of shit. Its all shit.
Nah fuck that, lets party in a ball pit.
Split a bag of beans with my team, get lean,
life’s a dream, innit. So dream cynics, use dream physics.
Fidgeting around with some genuine GC’s.
Lets split the city man and live in a teepee. Its easy,
just keep climbing the mountain, we were swimming in dept
now we’re drowning.
Why we sticking round then?

Your Prime Ministers a terrorist,
He’s chilling on the fence of every precipice,
using zero intelligence.
Chopping down the benefits, chatting next amounts of shit
but we’re the ones who’s smelling it.
Little kids are in the grip of ignorance,
thinking that they’re fighting but its silly
cos they don’t know who the villains is,
Its hideous.
The way these hypocrites are splitting out the dividends.
Ridiculous.
Melon heads.
Idiots.
And if you think our enemies are round here,
these Roundheads need taking down pegs by Cavillers.
That’s whats happening here.
I can smell the revolution man,
so I guess it’s getting pretty near.

Welcome to the year two thousand and futile,
where everything’s a giggle if you smile.
ooh child, things ain’t getting easier..
Sometimes i suffer synesthesia.
Im smelling shit in sepia.
Lets lament the mainstream media,
Let it die down, Don’t swallow what they’re feeding you.
Their need for you, is greater than your need for them.
Evil men.
Plotting ways to separate the needy from the greedy-dem.
So why are we keeping them.
We’re sleeping through the weeks and creeping deeper underneath all them,
we bleed for them.
They’re richer, ripping off our arms and legs to keep it free for them.
Weaker when we’re sheep again,
If we pretend we’re equal then we needn’t blend.
We could stand out and stand up.
Ill take a hand out, cos from the ground up, they surround us.
But we surround each other man,
and other than the fact we ain’t blood.
We’re still brothers man.
Whats the plan?
Shall we carry on regardless? Its always hardest when you’re blinded by the darkness.
So lets go and cuddle Rupert Murdoch, the poor sod,
He’s probably been hurt lots, had gurt loss.
Earth was, a place we hadn’t hurt once.
If we suck it dry it will be worth less.
If we suck it dry we will be worthless.
If we suck it dry we will be fucking worthless.

We’re struggling my brothers nothings never enough,
Always acting like we’re down on our luck.
We’re chomping at the bit when they are selling us stuff.
But if we stop then we’d be calling their bluff.

Bandcamp Daily  your guide to the world of Bandcamp